The two weather beaten wooden signs on the gate read

CLOSED TO HUNTING, TRAPPING AND OFF ROAD VEHICLES

There are some impressive vehicle barriers connected to the massive gate. I [Andy Martin] believe they were built by Border Patrol to stop vehicles driving over the border at nearby Puerta Blanca and getting on to the Guadalupe Canyon Road westbound. Eastbound is a dead end.

We saw no signs proclaiming No Trespassing here or anywhere else on the hike. We did not see anyone or any vehicles while hiking, and did not see much sign of Border Patrol activity past the gate. Did not spot any illegals trash along the main road, but once we started cross country there were the usual food & water containers, plus clothes and shoes. This trash was not very abundant or recent.

On returning from the hike my '04 Accord was all in one piece. On the drive back to Douglas I pulled over to let a Border Patrol vehicle pass and he stopped for a brief and friendly chat.

If Border Patrol sees you in this area they will likely want to know what you are doing. It is best to stop and let them know.

There are some issues here:

Route: 7 miles RT and 700' gain to tri-point only (we added some extra on the return)

We walked the wide dirt road from the gate to 31.3437, -109.0580. Then followed a minor jeep road to 31.3417, -109.0521. Then followed a dry wash south to the fence at New Mexico line. Crossed fence and followed wash until it curled back to AZ. Then followed fence due south to Monument 71. (first pic - Mick at the Monument). An International Boundary Marker is visible in the first pic. A close up view is in the second pic. Mick found an old register jar in a cairn just east of the Monument, with a couple entries from the last millennium. (no one I [Andy Martin] recognized) 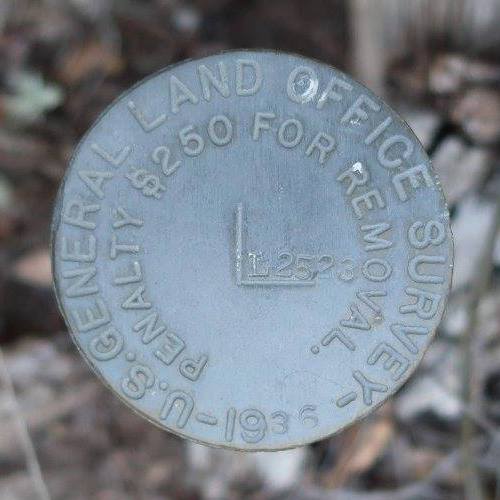 Cross country travel was an average bushwack - some brush, cactus and rocks to dodge, with faint game trails in places. A gully is crossed just north of the Monument. We saw no signs of recent cattle grazing. This ranch used to be the home of Drum Hadley, who likely limited/eliminated grazing here:

After resting at the monument a bit we hiked to the Guadalupe Mountains range HP x 5176T. (no register found) From here my sight level showed x 5171T to be about 3 feet higher so we hiked over there, left a small register, and then walked back to the car.

Information on the jog - where is the tri-point?

The jog is clearly shown on the National Map (screenshot on left). The fence lines follow the state boundaries shown in yellow. And another boundary line is shown just south of the Arizona & Mexico fence line. If we assume the international border follows the yellow line then the tri point is at the "corner monument", not at Monument 71. If we assume the international border runs straight through Monument 71 and does not jog then Monument 71 is at the tri point.

The 2014 Guadalupe Canyon AZ-NM-SON map (screenshot on right) further confuses the issue by showing the international border following neither fenceline.

I [Andy Martin] searched the internet looking for survey datasheets on the various markers (not found) and some explanation of the jog, but struck out.

Thus the Tri Point Tri Bunal will have to resolve this, and visitors are advised to touch every likely point ;)

Two picture (left: text describing the Monument and surrounding area, right: picture of Monument 71) from the 1898 book: Report of the Boundary commission upon the survey and re-marking of the boundary between the United States and Mexico west of the Rio Grande, 1891-1896.