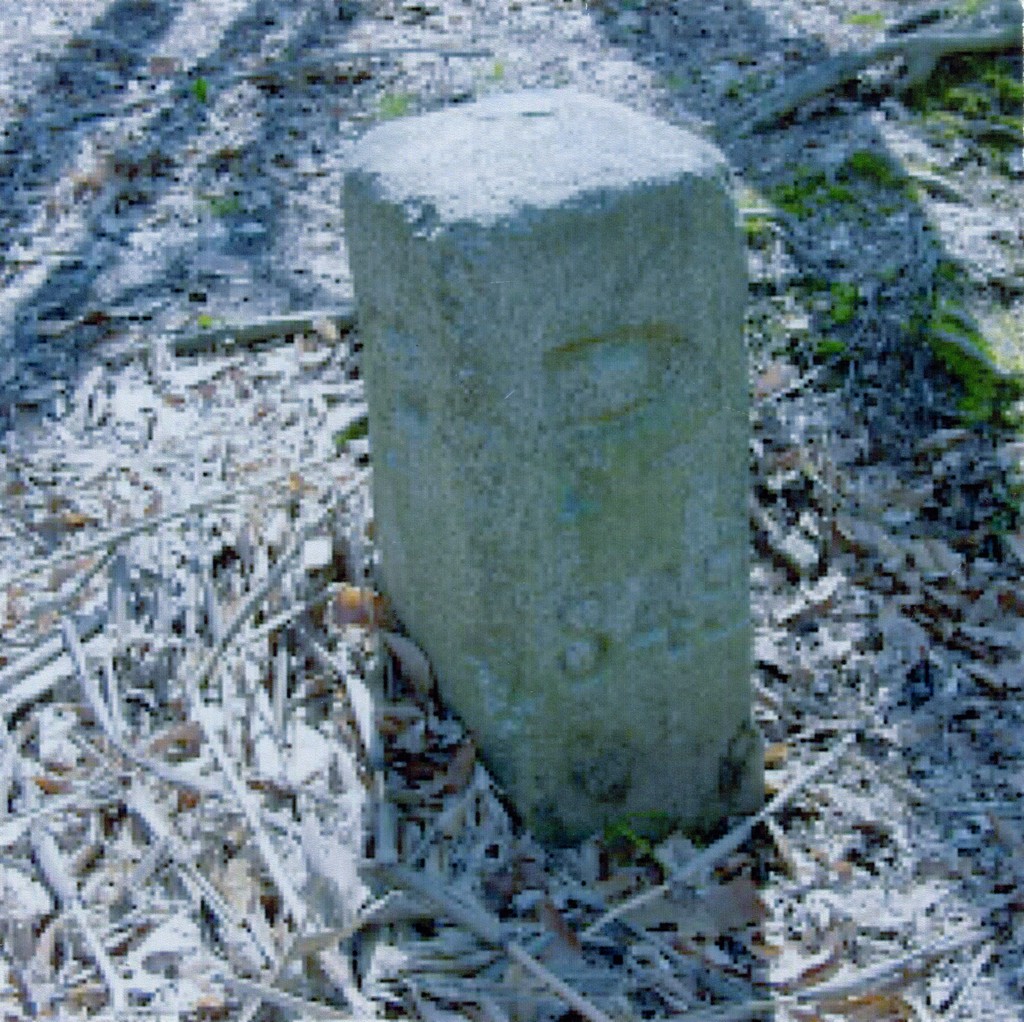 ACCESS ROUTE: From Newark, DE, go NW on route 896 about 3 miles to the MD line. Just in MD on the right is Larry Monger's home. Get permission to go on his property. From the Monger house, go N about 800 ft., passing Mr. Monger's shop, then bear E to an old stone post. This 1849 post is now only a mark on the DE - MD boundary and is not a tri-State corner. The tri-point is marked by a USGS survey marker a little north of the old monument. There are also USGS witness markers aimed at the tri-point.

In 1760 commissioners and surveyors were appointed to establish the base line and tangent line between MD and DE. This involved the N boundary of DE which is an arc of a circle having a radius of 12 English statute miles measured from the center of the town of New Castle, DE. After several years of trying to establish these boundaries, the proprietors became discouraged with the delays and sent from England two famous mathematicians, Charles Mason and Jeremiah Dixon, who verified the earlier work and ran the line between PA and MD ever since called the Mason and Dixon line. A resurvey 200 years later showed the location of the NE comer of MD to be in error by only 1.9 seconds of latitude. The Arc Corner is 0.8 mi E of the tri-point.

Update - ??? - Brian J Butler
You can view the trip report at The Corner Corner. 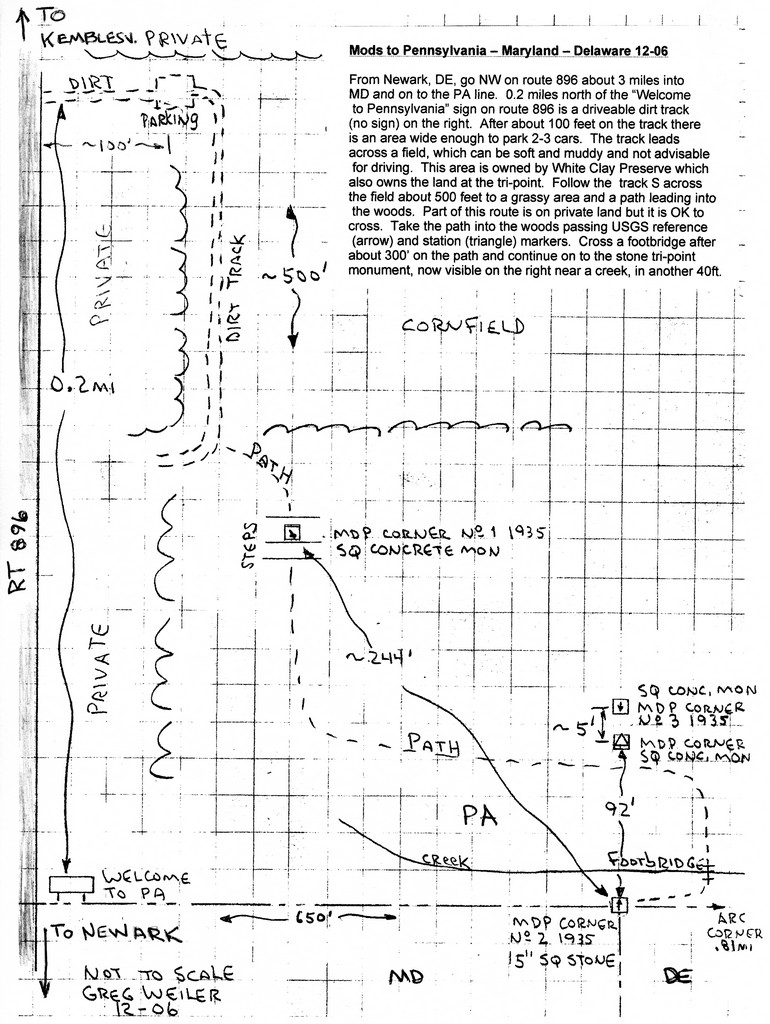 Update - April 8, 2011 - Jimmy Emerson
Jimmy Emerson has several photos on Flickr with some descriptions. You can start with this one and the 8 following photos. Some comments are:

The White Clay Creek Preserve of Pennsylvania has maintained a rather nice trail from PA 896 just across from The Wedge restaraunt. The hill and trail in the distance is in White Clay Creek State Park of Delaware.

[Flickr user pl8srgr8] This isn't the actual tri-state marker, but marks the current Delaware - Maryland border (due to the "wedge" border dispute between DE and PA, in 1849 this "wedge" region was officially a part of Pennsylvania). It is now in Delaware since 1921, but this marker still has the two "P's" claiming it as Pennsylvania. That's why there's no D on this marker. The original tri-state point is a few miles south, off of Elkton Road in Newark. The current tri-state marker since the 1921 agreement is the closer of the two shorter markers you mention - the one that says "MDP corner" on the top, and a triangle (but no arrow). See Wikipedia's article on Delaware Wedge for more details.


Thank you Doreen Kupchick for alerting us to an Aug 7, 2013 article (with photos and video) which appears on Delaware Online. Type "Three State in Backyard" in the search box.

Virginia & Dick Baldwin have provided public access to their backyard every Thanksgiving for the past 47 years, and up to 200 folks have taken the opportunity to visit the point where DE, MD and PA meet.

This is also the eastern end of the Mason-Dixon west-line boundary survey, which separates MD and PA.

According to reporter Maureen Milford, "the marker serves as a reminder of a piece of territory known as 'The Wedge,' an 800-acre tract of disputed ownership in the 1800's."

Update - March, 2017 - Frank Sutman
[new access route on public lands]: Take Route 896 North from Newark, DE. About 1 mile N of the MD-PA line, turn right or East on Chambers Rock Road. After about 1 mile turn right or South on Arc Corner Road. Follow the road about a half mile until the parking lot at the barrier. Hike South past the barrier until reaching a trail sign for the Tri-Point trail. The trail is roughly a two-mile loop in and out of small ravines to the West of Arc Corner Road. This accesses the tri-point while remaining on public land. The 1849 post is now only a mark on the DE - MD boundary and is not a tri-State comer. The tri-point is marked by a USGS survey marker a little north of the old monument. There are also USGS witness markers aimed at the tri-point. After you return to Arc Corner road, continue just a bit south to the large monument marking the "Arc Corner" of Delaware's northern border. This is just South of where the Arc Corner road intersects Hopkins Road.