At first, we thought this tri-point was in the Chattooga River with no marker, but the USGS topo map shows "Ellicott Rock" at this location. Research disclosed that Ellicott Rock was considered by some to be the tri-point. Ten feet upstream from Ellicott Rock is Commissioner Rock and a little farther upstream is Chattooga Rock which has a bronze marker disc on top. Ellicott Rock bears the inscription: "Lat 35 AD 1813 NC + SC". Another 0.1 mile downstream from the Rocks in the middle of the river is another large boulder with tripoint markings scratched on the top. It is suspected that this is graffiti. No one of these four rocks is at the exact tripoint, but Ellicott and Commissioner come closest. 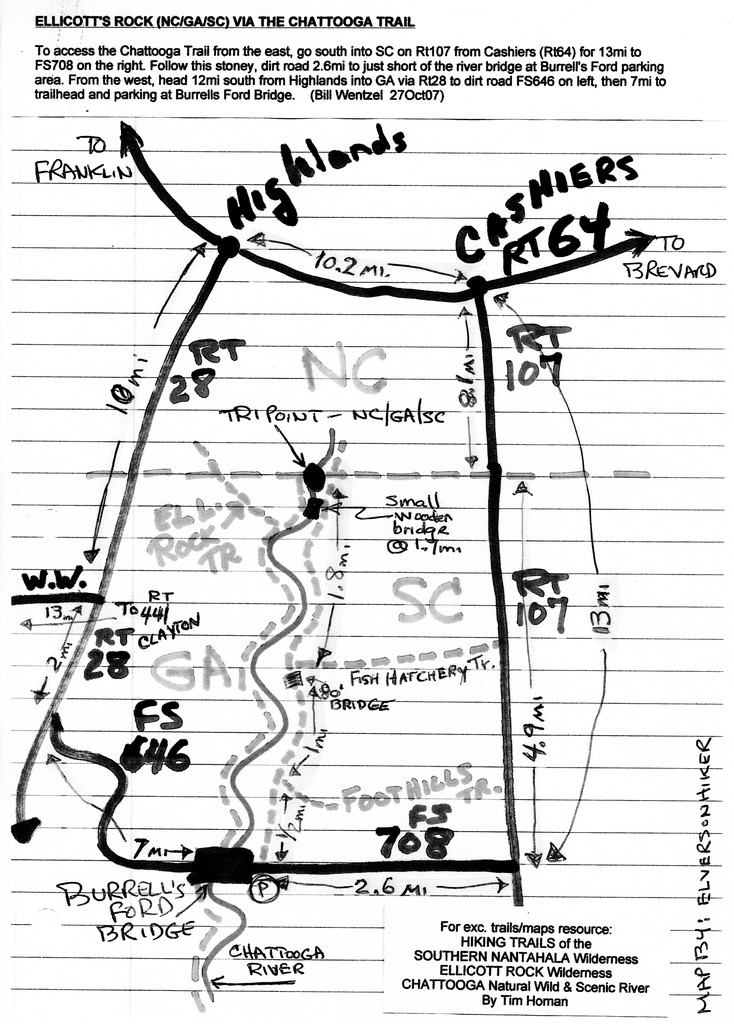 You can view the trip report at The Trek Stop. [Ed: Because the blog images obscure some of the text, it is quoted here. See the blog post for additional links.]

This one was a hoot and some sense of history came into play, considering what surveyors of old had to endure reaching/designating state lines and where they met. High-tech garb, computer-designed footwear, and the GPS weren't invented yet, nor were Mountain House, just add water, packaged meals.

Looking at available maps describing several trails leading to the spot, we decided to approach from the south, following the river north, or upstream, on the Ellicott Rock Wilderness Chattooga Trail. As we went, the eerie notes of "Dueling Banjos" twanged in our ears, recalling this river's role in the movie Deliverance. Pre-trip research convinced us that this trail would be the shortest and least demanding of the lot. Indeed, it clocked at about 3.2 miles one way, undulated moderately, and led us over a combo of rocks, roots, and flat, easy trekking, too.

To access the Chattooga Trail from the east, go south into SC on Rt107 from Cashiers (Rt64) for 13mi to FS708 on the right. Follow this stony, dirt road 2.6mi to just short of the river bridge at Burrell's Ford parking area. From the west, head 12mi south from Highlands into GA via Rt28 to dirt road FS646 on left, then 7mi to trailhead and parking near the [Burrells Ford] bridge.

On reaching the hiking trail's "short wooden bridge," you're .1 mi downstream from the 3Pt. Some thoughtful faction placed a helpful yellow sign on the trail w/arrow; otherwise, w/o it a GPS might be useful since this rock is about 15ft below the trail and not easily identifiable, the engravings unobservable.

You'll need to climb down to river level to spy the markings and, even then, look closely, this isn't like mall shopping. Plan to soil your hi-tech, hike-wear and get some SC dirt under your fingernails as you make the descent (and ascent) glomming onto slippery rocks and roots, perhaps a branch by chance. In fact, 25ft of rope might prove handy (maybe just leave it behind?).

Note: At the time of this visit, the SE U.S. was experiencing a formidable drought and the Chattooga was lower and tamer than usual. Under "normal" river behavior, exercise extreme caution when dropping down to search for the rocks' inscriptions, 2 actually: Ellicott's and Commissioner's, their I.D.s tending to get juxtaposed. See history here: http://rootsweb.ancestry.com/~scoconee/archived-txt/history/fch-04.txt. 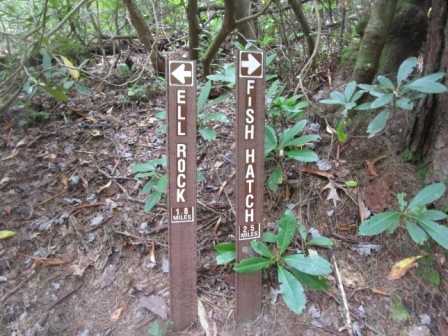 When you head north from Burrells Ford bridge on the Chatooga Trail, after 1.5 miles you cross a narrow 40' log bridge. After crossing be sure to turn left (Ell Rock) not right (Fish Hatchery), or you will do a 5 mile round trip dead end like we did. I had assumed the bridge was over the Chatooga River but it is over the East Fork.