There may not be a tripoint closer to a source of controversy than the point where Tennessee, Alabama, and Georgia meet close to the waters of Nickajack Lake.  A long-lasting drought in Georgia prompted the state's General Assembly to consider asking the Supreme Court to move the Georgia-Tennessee border to what should have been its proper location.

Unless something drastic happens in the future, those wanting to visit this tripoint will find it on a hill near State Line Cemetery.  To get there, one has to travel west on Interstate 24 past the junction with Interstate 59 and find Highway 156.  Follow 156 to Huckabee Lane.  Once by the cemetery, there will be an opening in the trees just across from the southwest corner of the cemetery.  Follow the trail in the opening, and on a small mound, you will find many rocks and flagged markers.  The tripoint sits in this area. 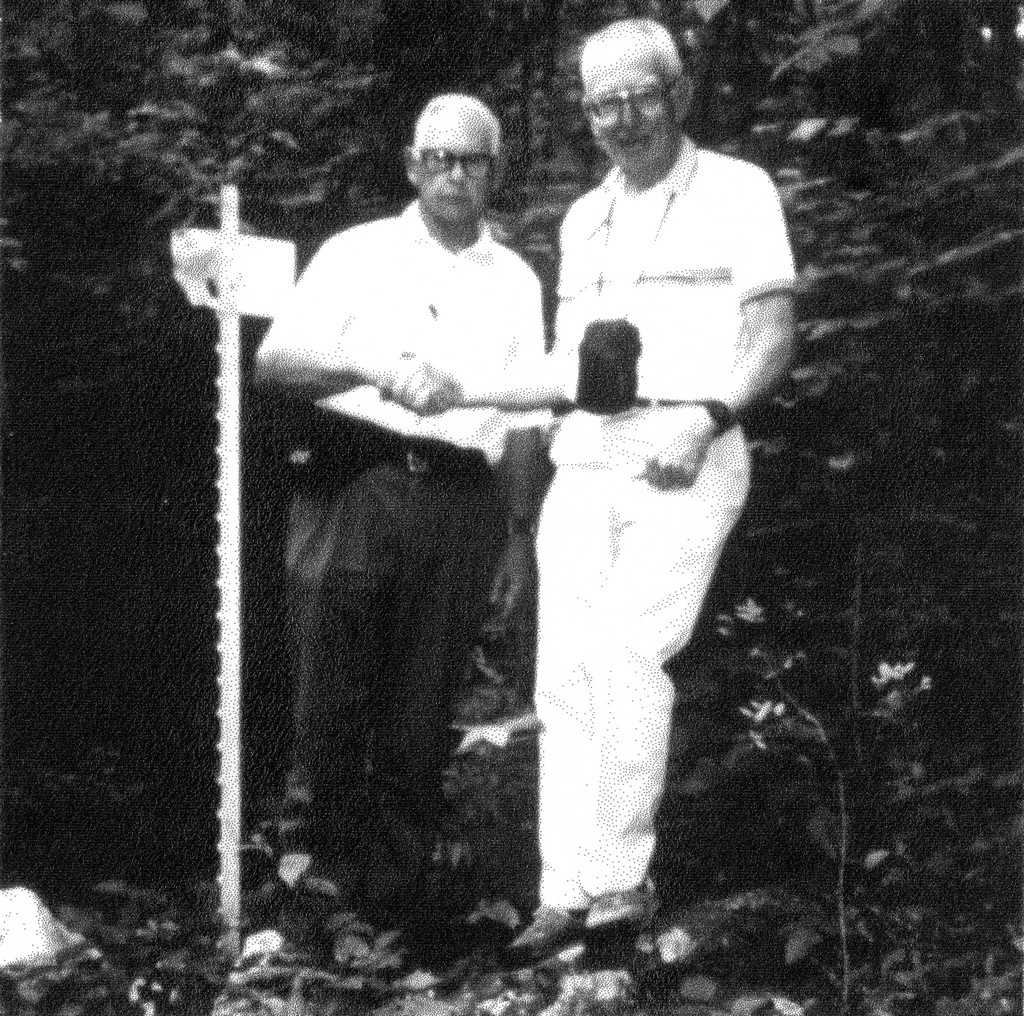 ACCESS ROUTE: From Chattanooga, TN, go W on I-24 to Route 156 (about 7 miles W of the junction of I-59 and I-24). Go about 5 miles W on Route 156, and then turn S at corner by the Macedonia Church, just before the causeway over Nickajack Reservoir. Continue S to the first right (W) after crossing Cole City Creek, then keep R across a plank bridge over a small stream. Continue W to State Line Cemetery. Park at the W end of the cemetery, and hike about 200 yards further W up a hill with about 50 feet gain in elevation. In the woods, and poison ivy, find an iron post and cement marker with TVA data on it. About 25 feet S (left), find an iron sign-post above some yellow painted rocks. The sign-post and yellow painted rocks are assumed to be the Tri-State point.

The N terminus of the AL-GA boundary is at Nickajack on the TN line and by statute at the 35th parallel. Boundaries in this area were the source of much contention and many surveys were run over the years. The NE comer of AL as now marked is more than 1 mile S of the 35th parallel, A survey in 1818 locates the comer one mile and 28 poles from the S bank of the Tennessee River and due S from the center of the old Indian Town of Nickajack, near the top of Nickajack Mountain.

Update - ??? - Brian J Butler
You can view the trip report at The Corner Corner.

From Lynchburg, it was onto the tripoint. We followed the directions in Jak Parsell's book to the Nickajack reservoir, and followed Macedonia Road and Coal City Hollow Road to the State Line Cemetery, where we pulled to the west end of the cemetery and parked out car. From there, the book told us to hike 200 yards further west up a hill; the reality was that 10 yards from the cemetery, the trees, shrubs, and vines were quite dense at the border of the woods, and looked quite impenetrable (and we were not dressed for any bushwhacking).

Examining our options, we followed the dirt automobile path that left the cemetery to the northwest towards the reservoir. About 75 feet after the path left the clearing, we noticed pink tie-offs on trees leading to the west. Figuring that these tie-offs represented the Georgia-Tennessee border, we followed them into the woods, and dodging some serous spiderwebs (but none of the poison ivy we were told to look out for), we arrived at an abandoned path about 50 feet higher than and 175 yards from the cemetery. Keeping the tie-offs in our line of sight, we followed this path south-southwest for about 50 feet, and where the path ended, we noticed the iron sign-post about 25 feet further to the west. When we made our way up to the sign-post, we noticed that this was in fact the tripoint, as we were standing on rocks painted yellow and orange, and a line of orange tie-offs headed off towards the south (representing the Alabama-Georgia border).

We searched the area for the TVA post/marker that was supposed to be 25 feet away from the tripoint, but were unable to find it. The uneven terrain prevented us from taking any pictures using the tripod, so individual photos had to do. After pictures, we had an uneventful walk back to the car. Seven tripoints down ... many more to go!

Update - July 28, 2006 - Bill Wentzel
You can view the trip report at The Trek Stop. [Ed: Because the blog images obscure some of the text, it is quoted here. See the blog post for additional photos.]

Unlike the too-cute Tennessee tri-point at Cumberland Gap, this tri-state corner needs some work. We located the TVA sign, now half-rusted away (J.P.'s report for this corner is dated 1991). It's post is festooned like a Maypole with orange surveyor ribbon. We could not find the other mentioned nearby post except for one laying on the ground, tagged with orange and yellow ribbon. Nor did we locate a pile of yellow rocks. There was, however, a breadbox-sized orange-ish and yellow-ish painted rock in a gully about 15 feet from the TVA sign. The TVA post was at the end of a barbed-wire fence which seemed to run eastward with the E-W state line. The GPS was no help since we didn't have the definitive coordinates and the trees blocked satellite reception, anyway.

J.P.s directions are good except for the "200 yds." hike which should read "200 ft." From the parking area at the corner of the State Line Cemetery, go west through a hole in the brush for the trail. Do not bear right at the top of the grade but go straight onto the vague trail. At this time, there was a blow down with pink tape which some thoughtful person put there. Step over this tree and you'll spot the Maypole at 10 o'clock. Also, the turn south (left) at the Macedonia Church is designated "Macedonia Church Rd." After crossing Cole City Creek, make a right turn on Beakas Way (going straight will take you into GA past a "Welcome To Dade County" sign). Go to the very end of this road and you're there. 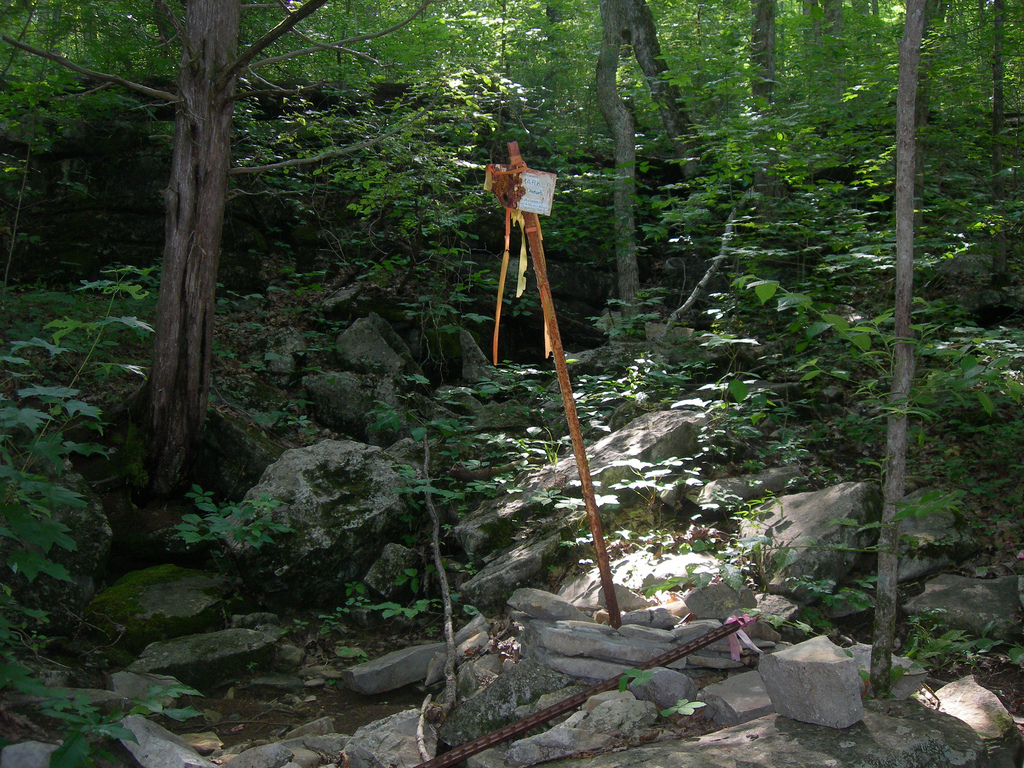 Jimmy Emerson has several photos on Flickr with some descriptions. You can start with this one and the 5 following photos. His comments are:
The Camak stone was placed in 1826 to mark the (incorrect) point where Alabama-Georgia and Tennessee meet. The stone has been missing since 2007. The stone had been painted day glo orange and all of the original lettering had faded away. The site is marked by the fence post and orange ribbons.

The State of Alabama placed this concrete marker March 1, 2011 at the (incorrect) but official border corner. Jimmy Emerson has taken several photos of this "new" tri-point marker. You can start with this one and the 5 following photos on Flickr.

The steel post with orange ribbons at some in the past had been placed beside the original Camak Stone and after the stone was stolen in 2007, the post was pretty much the only identification of the actual corner. The State of Alabama left the post when they placed the concrete marker, though it's just leaning against a tree right now.