There was a Supreme Court case to settle a border dispute between Colorado and New Mexico. You can view it at "New Mexico v. Colorado, 267 U.S. 30 (1925)". You can read more background on the dispute in the "Four Corners Monument still the legally recognized landmark despite reports" article. You can do an internet search of "four corner controversy" for more articles/links. John Mitchler published an excellent article in Apex to Zenith Issue #85 - Second Quarter 2009.

The quadri-point is located at the "Four Corners Monument" which is administered by the Navajo Nation.

Bill Wentzel has a blog post at The Trek Stop with links to articles detailing how the true quadri-point is off by as much as 2.5 miles from where it is currently located. You can also read his 2006 trip report. 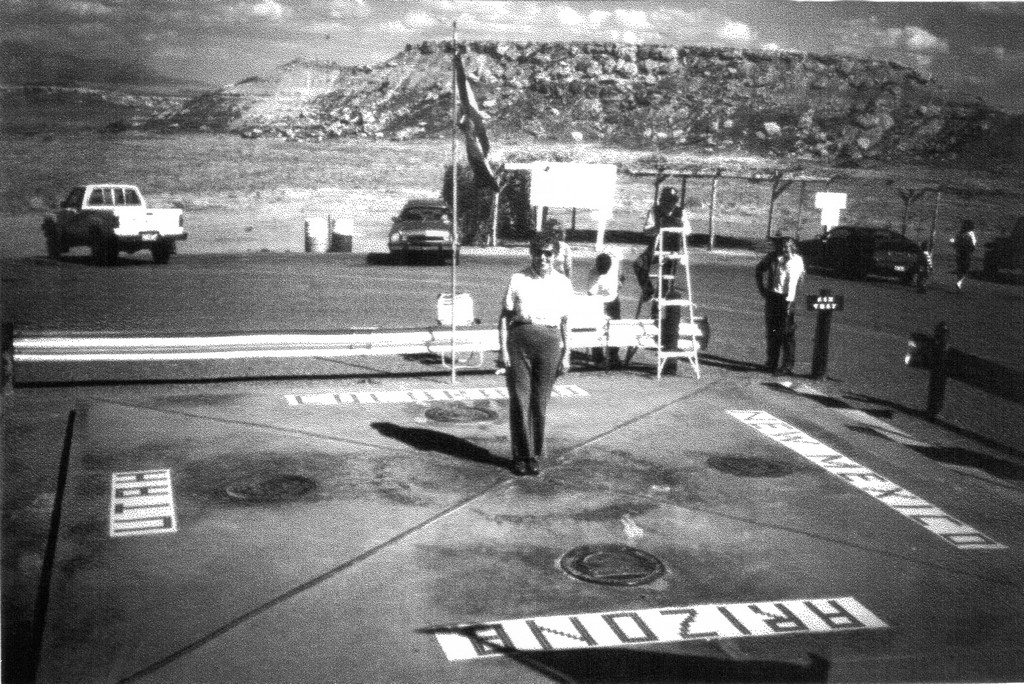 ACCESS ROUTE: This is Four Corners, the only spot where four States come together. It can be considered as four tri-State comers at one location. However, it is the same spot in each case, so it is simpler to count it only once.

Four Corners is located on the Navajo Indian Reservation less than 1/2 mile off US 160. A fee is charged to enter the property. The Four Corners point was established by C. Robbins as the closure of the CO - NM line in 1875. A new stone was set in 1899. In 1931 Everett H. Kimmell, General Land Office Surveyor, replaced the stone with the concrete monument now there. In 1962 a 28 foot square ornamental concrete slab was placed around the monument. 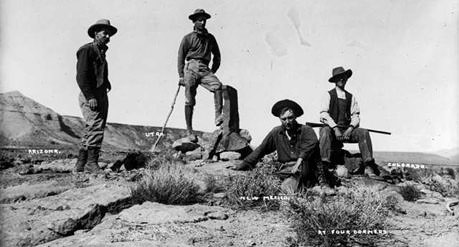 Dale Sanderson provides detailed history on surveying the tripoint location and several historical photos [Ed: see left for example] at US Ends along with his family's trip report.

[Ed: photo caption] It's a tradition that has apparently gone on for decades: Four men pose in each state - from left to right, Arizona, Utah, New Mexico and Colorado - at the Four Corners in this photo dated Sep 21, 1908. The large boundary stake in the center marks where the corners of the states - and tourists' imaginations - meet.