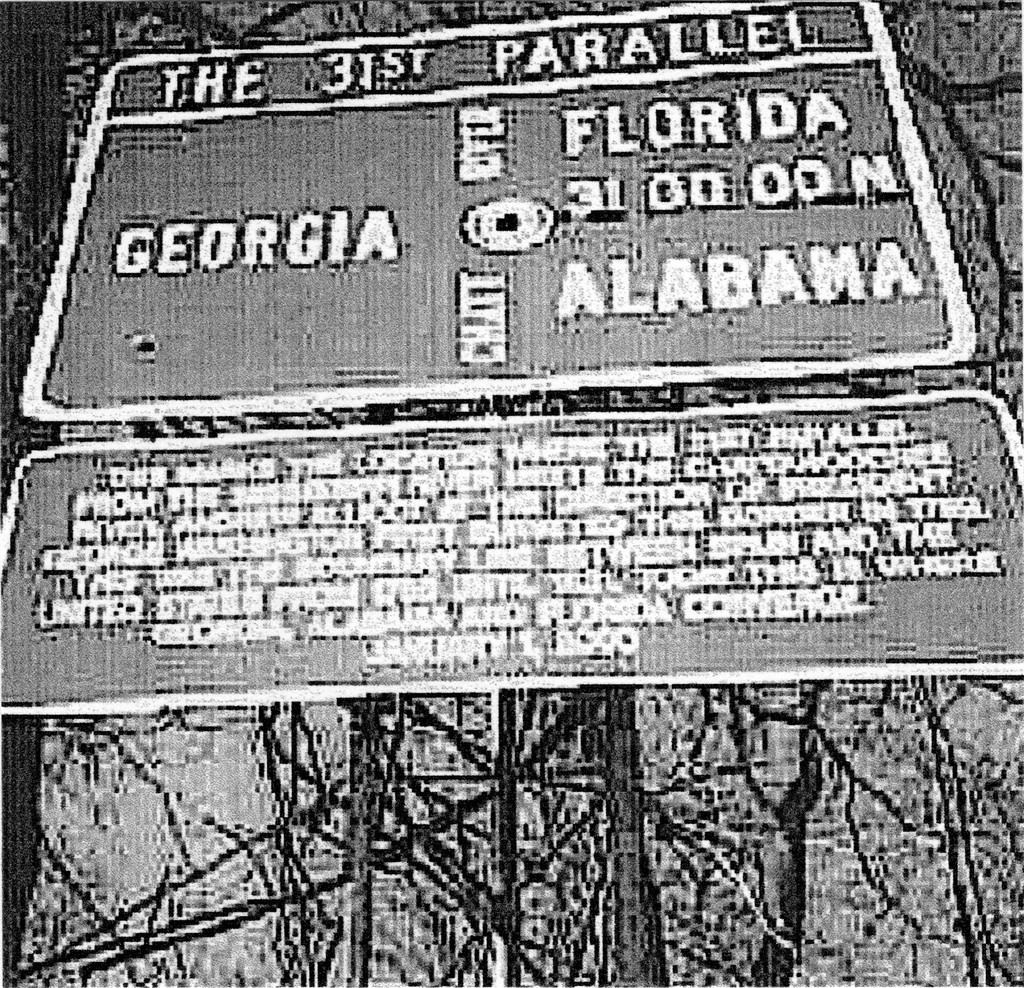 ACCESS ROUTE: Georgia claims all of the Chattahoochee River between Georgia and Alabama, so the tri-point is at the high water mark on the Alabama shore at the Florida line.

The State of Alabama Code Book describes the boundary as follows: "The boundary line between AL and GA commences on the W side of the Chattahoochee R. at the point where it enters Florida; from thence up the river, along the western bank thereof to the point on Miller's Bend." Continuing, "Between AL and FL is a line commonly known as the "mound line" or "Ellicott's line", (surveyed 1795-1799), as distinguished from a blazed line known as the "upper" or "Coffee" line, (surveyed in the 1820's), commencing at a point on the Chattahoochee R. near a place known as "Irwin's Mills"; and from thence to the Perdido River, marked the whole distance by blazes on trees and by mounds of earth, at distances of about one mile."

The text of the "THE 31st PARALLEL" photo shown above is:

THIS MARKS THE LOCATION WHERE THE 31ST PARALLEL FROM THE MISSISSIPPI RIVER MEETS THE CHATTAHOOCHEE RIVER. ANDREW ELLICOTT AT THE DIRECTION OF PRESIDENT GEORGE WASHINGTON FIRST SURVEYED THIS BOUNDARY IN 1799. THIS WAS THE BOUNDARY BETWEEN SPAIN AND THE UNITED STATES FROM 1795 UNTIL 1821. TODAY THIS IS WHERE GEORGIA, ALABAMA AND FLORIDA CONVERGE.

Update - Summer, 2006 - Bob Whitney
[Ed: also published in #73-06q2-p23].
Driving in on the dirt road marked Lucy on Jack's map is the best route. It does not appear feasible to walk in from Chatahoochie State Park. Also, the current owners of "5958", noted in Jack's booklet are simply hostile towards visitors. There is a brick house on the NE comer of the Lucy intersection with AL 95. My GPS indicated that the Lucy junction is 2.68 miles from the tripoint. Note that all distances used here are straight line distances to the tripoint. At 1.84 miles, pass through an unlocked gate. At 1.69 miles turn right. At I.44 miles I parked and waked due to a big hole in the road. I noticed later that an SUV could get past this point. At I .22 miles pass through another unlocked gate and turn left. At 1.08 miles come to a hunting stand of sorts and turn right. At 0.67 miles turn left at another stand. At 0.50 miles turn right at another stand. At 0.47 miles take the woods road (left fork). At 0.20 miles there is a large clearing to the right. It is easy from this point to bushwhack eastward to the tripoint. The bushwhacking is much toucher on the woods road further southward to a fence. My GPS reading at the tripoint was N30/59.998 and W85/00.162. Frank Sargent's reading at an earlier time was N30/59.997 & W85/00.170. The inportant reading is the N-S one, where we were very close, since the tripoint is on the river bank. It is marked by a 15 foot sign, easy to spot from the river. There also is a large green sign labeled "FLORIDA STATE LINE" about 20 yards inland.

Update - May 15, 2009 - Jack Baker
The trip report at The Trek Stop or shown below with details on contacting land owner Ansely Whatley.

Contact Ansely Whatley by e-mail well in advance of your travel schedule to arrange a visit: answat@aol.com. Mr. Whatley, who lives in Dothan, AL, and drove 30 miles to accommodate tri-pointer Jack. Since the heavily wooded access to be crossed was home to rattlesnakes, cottonmouths, chiggers, and skeeters, Whatley, a true Southern Gentleman, kindly provided Jack with bug spray and knee high rubber swamp boots before driving him to within 300 yds. of the marker. From here a bushwhack to the Chattahoochee River followed, and they trodded merrily to the recently erected sign atop a 15 ft tower which faces east, meant to be seen from the river.

It is important to understand that this tri-corner is on private property in a county with strict enforcement of trespassing laws. In that Whatley's land is directly east of the Chattahoochee State Park, some have attempted to access the tri-point through the park. Mr. Larry Weaver, park ranger, strongly advises against this route. The owner of the land directly south of the FL line has erected a fence along his property line that prevents access by this previously suggested route described in Jack Parsell's U.S. State Tri-Corners guide. Mr. Whatley is your only way in.

[Ed: A2Z #85-092q-p27: Bill Wentzel notes: Do not access the site from AL or FL, nor use the Chattahoochee State Park approach. Work with the land-woner on this one!]

Ansely Whatley owns 700 acres of land dedicated as a nature preserve, 300 of which are set aside as a nature sanctuary. Hunting of deer and turkey is allowed on a limited basis. Whatley feels fortunate that he is able to warden this piece of paradise and feels obligated to share it with others. This particular area is rich in history including a goodly share of boundary issues. Tri-pointers are very welcome within the access window between the end of April and October 15th (based on hunting season dates).

[Ed: Jim Wright says the email address no longer works as of Oct, 2013. You will have to try the old fashioned way - face to face.]