“[low baritone] Swing low … [kid’s voice] Happy feet” – okay it doesn’t quite work. It’s all downhill from the highpoint to the lowpoint – so to speak.

[Ed: Paragraphs in italics are taken verbatim or heavily paraphrased from Jack Parsell’s book “Guide to the Lowpoints of the United States” which is the basis for this guide.]

While visiting a state for its highpoint, you might consider visiting other geographic extremities like its lowpoint. And I mean more than visiting Lowpoint, Illinois after summiting Charles Mound. The USGS publishes the “Elevations and Distances in the United States” which is nicely summarized in Wikipedia’s “List of U.S. states by elevation“.

Low-pointing requires some venturing into remote areas across inhospitable terrain (heavy brush and poison oak/ivy are quite common) and private property (please contact land-owner before entering). As lowpoint completer #3 Bob Nungester says, “Lowpoints aren’t for everyone.”

After reaching the highest point in each of the 50 US states, a natural follow-up was to visit all of the state law points. Jack Parsell accomplished this mostly during the years 1988 through 1991. Visits to beaches in some of the coastal states occurred at earlier times, as much as forty years ago.

This guide provides directions and hints for getting to the interior low points. Of the 51 low points (including DC), 24 are currently considered coastal – being at sea level for states bordering the Atlantic, Pacific and Gulf of Mexico, or lake levels for some of the interior states. Access to any of these low points is simply a matter of going to the beach or shore of your choice and dipping your foot in the water.

This edition [Ed: 2003] includes the new low point for Colorado and a corrected elevation for Utah. A spot has been found in extreme SE Texas [Ed: Stell-Lind Banco 128] that is about 1 foot below sea level. Another area near Everett, WA, has been found on topo maps to be -3ft. These will be investigated further and results reported in future editions. [Ed: With new USGS topo maps (2010 – 2017) both Texas and Washington no longer have below sea level spots. See the info panels below for details.]

Alaska, California and Louisiana have locations below sea level, so their coastal beaches do not count as low points. Note that the -4ft level for Alaska has not been verified by USGS, so any sea level visit is still acceptable. As mentioned above, possible new low points for Texas and Washington may remove their coastal low point status. The interior state low points are usually located on river banks or lakes where the state line reaches or crosses the water. Two of the states, New Mexico and South Dakota have low points which used to be on river, but now are on lakes because of dams downstream in the next state. Because of their unique nature these two are included with the interior states and directions for access are given.

Precise locations are often difficult to determine. In many instances state line fences stop at the edge of the river flood plain, and a compass and/or GPS must be followed for the remaining distance to the water. As contrasted with mountain summits which are usually on public land, many of the interior low points are on privately owned property. In some instances it is difficult to determine the ownership and to obtain permission to go on the property. Information in this regard is given in the directions for several of the low points. Finally, another factor of concern is river water level. Many of the low points are situated on flood plains which during periods of high water are inundated and inaccessible. It is best to go to many of these locations during low water periods.

There are several websites with a focus on low-pointing:

There are several websites with random posts on low-pointing including but not limited to:

Through the “Apex to Zenith” newsletter, club members receive continuing coverage on lowpoints. Updates (access, monument status, etc) are found in the newsletter and posted online in this guide. A small sample of articles are:

Finally, you can see who has completed the 50 state lowpoints at our “Lowpoint Score Board” page.

You may also be interested in a “US States Lowest Points online quiz hosted on sporcle.com.

This page, “US Lowpoint Guide”, is an aggregation of multiple sources. It is largely based on Jack’s guide book. It includes several updates/clarifications based on trip reports from various contributors. Please contact us at guides@highpointers.org if you have any suggestions or updates.

You will see many lowpoints are defined by water (river, ocean, lake). Where do you define the lowest point for North Carolina when its the Atlantic Ocean? This guide arbitrary chooses the closest point (as the crow flies) to the respective highpoint. In some cases it also lists an alternate closer equivalent point (eg, Puget Sound and Pacific Ocean for Washington state).

This page contains three major sections below. The first contains a map showing each state’s highpoint, lowpoint(s) and lines drawn between them. Below the map is a large table listing all the lowpoints and their associated data. The middle section is the collection of show/hide (open/close) information panels with details for each lowpoint. This includes trip reports and updates as well as data like elevation, location, etc. The last section is a series of appendices such as trivia answers, an interview with Jack Parsell on low-pointing, etc.

This table provides summary information about all the lowpoints.
State – Those with an * indicate alternate but closer lowpoint to the highpoint
the link jumps you to the information panel
Location – Location of low point usually specified by USGS/Wikipedia
Low Elev – Elevation of lowpoint
the link takes you to our forum discussion group
High Elev – Elevation of the state’s highpoint
Hi-Low Span – Difference in elevation between highpoint and lowpoint
Hi-Low Distance – Distance in miles between the highpoint and lowpoint
[You may re-sort this table by clicking the small arrows found in the column headers.]

This section contains information panels for each lowpoint. Click on the name of the lowpoint and a panel opens up presenting the details about the lowpoint. This includes Jack’s trip report and more recent trip reports or updates if available. You will also find additional information such as elevation, location, etc.

This graph shows shows the highpoint (red) and lowpoint (green) elevation along with the mean (black) elevation of each state/populated-territory. Click on the image to view in full scale. 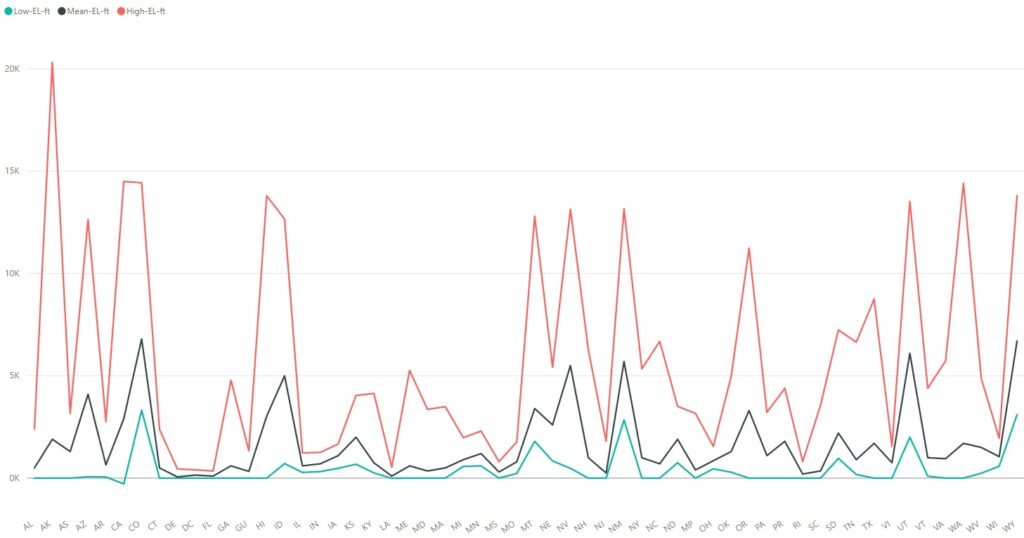 This guide defined “lowest” as lowest surface elevation. Another obvious definition would include underground points such as caves, mines, etc. Scuba divers might try lowest/deepest point you can dive. The permutations start to boggle the mind.

You might consider the “deepest hole” (sinkhole, basin, crater) in each of the 50 states. Andy Martin has a first draft of this list (collected with help from many contributors like Mike Schwartz and Tom Dunigan) on his website. Andy has written a nice description of “The Hole Story” (.txt file) as well as an article in the Apex to Zenith newsletter (Issue #77 – Second Quarter 2007, pages 9-10). He has data tables which are graphically displayed in the map below (

You may also want to read the newsletter article “The Flattest US States? Not What You Think” (Issue #105 Second Quarter 2014) and the associated National Geographic article.

[Ed: This is an excerpt of an interview with Jack and Joyce Parsell by Roger Rowlett. The full interview was featured in Issue #60 – First Quarter 2003 of the “Apex to Zenith” newsletter.]

Why did you start doing low points after completing your 50th state (Gannnett) in 1989?

Somebody said what are you going to do now that you’ve done all the highpoints. I was joking, and said, I guess I will try all the low points. But earlier, in 1988 when we were going out to ski at Red Lodge we stopped at the Wyoming low point which is where the Belle Fourche River flows into South Dakota. We had to hike down along the boundary line fence. We ran into a rancher. He didn’t mind us going down there but he said, “Watch out for the bulls.” So that was the real start of it.

Are there any rules for “lowpointing”?

I don’t think anybody has ever done them before so I made up the rules on my own. The high tide mark is the point we count for states with sea level elevations. For interior lakes it is the high water level.

Most of the interior lowpoints are where rivers exit into adjoining states and you often have to follow a fence down to the river. On larger rivers the fences don’t go all the way and you have to follow a compass heading. I don’t know how precise that is. We usually try to get down to the water itself. We stick a toe in the water. There’s no definition on how high the water has to be.

What are some of your favorite low points?

We went to the lowpoint of Arizona which is the Colorado River where it runs into Mexico. When we were there there wasn’t a drop of water in it. All the water was in an irrigation ditch which runs parallel to the river. We just walked out in the middle of the dry riverbed. It was quite wide, probably 200 yards.

In fact that’s where the picture on the cover of the low points book was taken. We had checked with the immigration officials. They couldn’t figure out why anyone would want to do that. I probably wouldn’t want to try it now with the current border problems.

What are some other interesting low points?

The ocean beaches of course are quite nice. We visited the ocean or lake low points in each state. Our favorite beach low point was where Lewis & Clark ended their journey in Oregon.

Nevada used to be difficult to access. It is at the very southern tip on the Colorado River. But recently I got an email saying that the Indians have built a casino there and it’s just a few hundred yards from the casino to the low point, and there is now a bridge across the river. It’s also a tristate-point if you go out in the middle of the river.